How MITRE ATT&CK can be used to select

use cases for your SIEM Implementation

When implementing a SIEM Solution one of the biggest challenges for companies is to answer the question which threats should be detected and how to prioritize those threats.

One, if not the most, common answer to the question which attack patterns are frequent is MITRE ATT&CK. This matrix describes the goals of attackers (“tactics”) and associated actions (“techniques”) to achieve those goals. MITRE ATT&CK has made its way to be the quasi-industry standard when it comes to describing attack patterns.

However, practically speaking, this answer isn’t that helpful either because the MITRE ATT&CK matrix, at this point, contains about 600 active techniques.

This might technically solve the initial problem of not knowing which attack patterns are out there, but the amount of information provided is so overwhelming that the outcome stays the same – investing months of work to read through hundreds of techniques is hardly an attractive solution.

Companies new to cyber security still face the challenge of not having a tool at their hands to efficiently decide what to detect with their SIEM.

How can MITRE ATT&CK be used as a source for strategic threat intelligence?

We want to help companies with exactly this problem. Our tool “attack_rate” parses the Threat Intelligence data provided by MITRE ATT&CK into an easily accessible and understandable format. It parses the MITRE ATT&CK database which is provided in the STIX 2 format through the mitre/cti (cti = cyber threat intelligence) repository on GitHub. The exact functionality of the tool will be discussed in another more technical blog post.

Our tool will write its output into a CSV file. If you don’t want to go through the hassle of setting up a ruby environment locally you can simply download the current CSV or XLSX file from our GitHub repository.

The term “Threat Intelligence” is used somewhat ambiguous in cyber security. In the context of SIEM the thought is compulsory associated with it is often the use of threat intelligence feeds. When we say threat intelligence in this context, we mean the usage of such data as a strategic tool.

What should be the goal of a well implemented SIEM?

First of all, we should come to a common understanding of what should be achieved by its initial implementation. The following objectives can usually be agreed upon:

Two Third of the relevant information can automatically be gathered by using attack_rate. The last step still requires a manual analysis, but the overall effort can still be drastically reduced by limiting the scope of the manual evaluation which results in days of work instead of months.

Which MITRE ATT&CK techniques should be in and out of scope?

First of all, we must look at the tactics themselves as there are some that can be excluded categorically because a detection by a SIEM system is not possible, not practical or only achievable with very low accuracy. 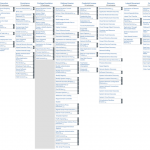 Next Step: Prioritizing techniques by their prevalence

Now we enumerate the remaining tactics and prioritize them by their prevalence. The assumption behind this is that the most common techniques are also most likely to reoccur in your IT environment.

In the generated excel file the column “Groups” represents the prevalence of the technique. This information is based on the Advanced Persistent Threats (APT) that have been documented to use this technique.

This information can also be accessed through the web-based version of MITRE ATT&CK. It can be found in the Procedure Examples section of each technique and start with G (which stands for group).

It can be quite interesting to have a deeper look at the documentation of individual groups as the data set in MITRE ATTA&CK also contains general information about each group, their supposed background and assumed objectives. 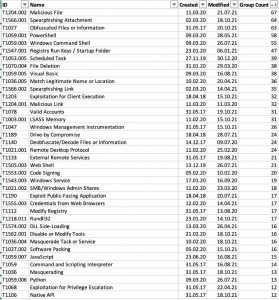 With the approach outlined, we have created a way to prioritize the techniques described in MITRE ATT&CK without much effort – which will make the following case-by-case analysis much easier.

We see MITRE ATT&CK as an entry point to help answer the question of which detection mechanisms make sense to enter the SIEM world. This does not mean that we recommend developing a separate SIEM use case for each MITRE ATT&CK technique identified. Therefore, one should also address the questions of how the scope of use cases can be derived most meaningfully from MITRE ATT&CK techniques, whose interests are to be taken into account in the process, and which standards one can fall back on here.

The SECUINFRA SIEM Experts Team is specialized in the areas of "Managed SIEM" and "Co-Managed SIEM". The team not only performs the classic operational SOC activities such as analyzing and evaluating SIEM alerts or threat hunting, but also designs, implements and operates the SIEM environments.

The SECUINFRA SIEM Experts Team is specialized in the areas of "Managed SIEM" and "Co-Managed SIEM". The team not only performs the classic operational SOC activities such as analyzing and evaluating SIEM alerts or threat hunting, but also designs, implements and operates the SIEM environments. This includes SIEM system maintenance, use case development and enhancement including creation and maintenance of audit log policies and runbooks as well as monitoring of log source connectivity. As a further added value for our customers, our SIEM experts not only forward detected security incidents, but also support the incident response activities with detailed analysis information and instructions for action.