Finally, the time has come: Our Berlin office has moved to the HOWOGE quarter in Berlin-Lichtenberg! Our new address, where the SECUINFRA management as well as the departments Finance, Backoffice, Marketing as well as the extended Cyber Defense Center (CDC) can be found from now on, is:

Due to the positive business development, which despite the Corona pandemic also showed pleasing growth last year, we needed significantly more space for our Berlin-based departments. Last fall, during our search, we came across the 18-story office tower at Stefan-Heym-Platz 1, which, since its completion, has been an urban landmark at the junction of the Friedrichshain and Lichtenberg districts. It was not only the prestigious location with a fantastic 360-degree view of Berlin that convinced us immediately – the fact that the quarter is predominantly built to the KfW Efficiency House 55 standard and is equipped with a climate-friendly energy concept also fulfills our demand for an ecologically sustainable rental property.

We are already looking forward to welcoming our customers, business partners and friends soon in our new premises on the 13th floor of the office tower at Stefan-Heym-Platz 1!

Until then – stay healthy!

Background: About the origin of Stefan-Heym-Platz

The popular Stefan-Heym-Platz with the well-known Fischerbrunnen as a landmark was re-planned in the course of a participation process in 2015. More than a hundred interested people responded to the call and developed various ideas in workshops on the function and design of this central place in Berlin-Lichtenberg.

Since 2014, the square has borne the name of one of the most important German writers of the 20th century, Stefan Heym (1913-2001). By naming the square, the district of Lichtenberg commemorates “a person who spent his life literarily and journalistically campaigning against the abuse of power.” (Source: howoge.de) 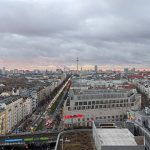